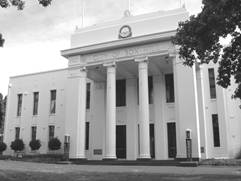 The Box Hill Town Hall complex (1022 Whitehorse Rd., Box Hill) provides a comfortable and well resourced base for the various activities included in a Feldenkrais Training Program. Located in a lively multicultural area, the venue is well serviced with a wide range of places to eat and shop. It is approximately 15 km east of Melbourne and is easily accessible by tram, train, bus or car. Melbourne, Victoria’s capital, is located around the shores of Port Phillip Bay. The city itself sits beside the Yarra River, about five kilometers from the bay. Renowned for its sense of style and elegance, Melbourne boasts glamorous festivals and events. It also has Australia’s best shopping, a lively passion for eating and drinking, and a flourishing interest in the arts. Great vestiges of nineteenth-century architecture, built following the discovery of gold, are heady reminders of a prosperous age, while beautifully tended parks and gardens present a therapeutic respite from the pace of city life. Victoria is Australia’s second-smallest state, covering 227,600 square kilometers – roughly the size of the British Isles. Packed into such a compact area is a wealth of diverse regional areas and attractions, from national parks and forests teeming with wildlife to wineries, lakes and mountains offering skiing, climbing and hiking. Best of all, many of Victoria’s unique and varied landscapes are easily accessible as day trips from Melbourne.

The Mindful Action Studio is a dedicated Feldenkrais space  where people come to participate in classes, workshops and individual functional integration sessions. It is a comfortable well equipped learning space.  It is easily accessible by public transport and has plenty of parking, shops and eating places nearby.

Sydney is Australia’s largest and most famous city. It’s home to beautiful beaches, iconic buildings, historic landmarks, award-winning restaurants, and a vibrant culture. From the breathtaking views of Sydney Harbour to the serene tranquility of Hyde Park, Sydney has something for everyone. Sydney Harbour is one of the most photographed locations in the world, including the Sydney Harbour Bridge and the Sydney Opera House. Strolling along Circular Quay you can soak up the atmosphere, or catch a ferry to Cockatoo Island or Watsons Bay and enjoy the beauty of the harbour and its surroundings. As well as being a main transport hub, Circular Quay has some of Sydney’s best restaurants.

The Briswest Hall provides a comfortable and well resourced base for the various activities included in a Feldenkrais Training Program. Located in an easily accessible area, the venue is well serviced with a range of places to eat and shop. It is approximately 3 km north of Brisbane and is easily accessible by bus or car. It is close to Brisbane and main arterial roads from surrounding areas. (132 Latrobe Tce Paddington)

Brisbane is the capital and most populous city in the Australian State of Queensland and the third most populous city in Australia. Brisbane’s metropolitan area has a population of over 2 million and the greater South East Queensland area more than 3 million people. The Brisbane central business district stands on the original European settlement and is situated inside a bend of the Brisbane River approximately 23 kilometres from its mouth at Moreton Bay. The metropolitan area extends in all directions along the floodplain of the Brisbane River valley between the bay and the Great Dividing Range.

Brisbane is named after the river on which it sits which, in turn, was named after Scotsman Sir Thomas Brisbane, the Governor of New South Wales from 1821 to 1825. The first European settlement in Queensland was a penal colony at Redcliffe, 28 kilometres north of the Brisbane central business district, in 1824. That settlement was soon abandoned and moved to North Quay in 1825. Free settlers were permitted from 1842. Brisbane was chosen as the capital when Queensland was proclaimed a separate colony from New South Wales in 1859.

Brisbane has hosted many large cultural and sporting events including the 1982 Commonwealth Games, World Expo ’88 and the final Goodwill Games in 2001. It was rated the 16th most livable city in the world in 2009 by The Economist.